What are Intramural Fibroids? 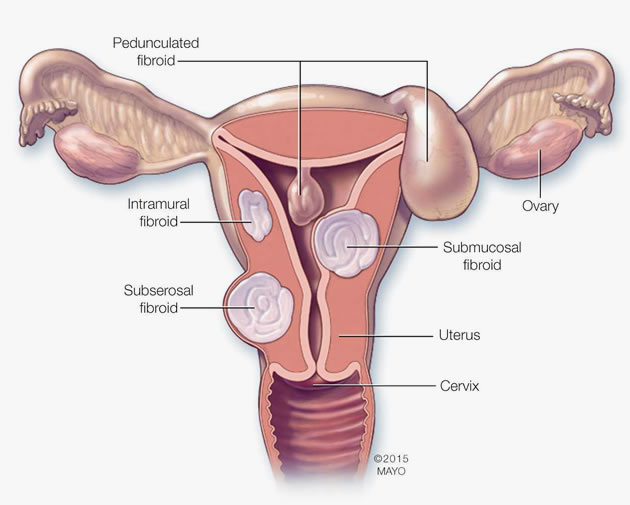 Effect of Fibroids on Reproduction

The impact of fibroid tumors on successful reproduction, have a lot to do with location. For the most part, only those fibroids that impinge upon the endometrial cavity (submucosal) affect fertility. Exceptions include large intramural fibroids that block the openings of the fallopian tubes into the uterus, and where multiple fibroids cause abnormal uterine contraction patterns. Another lesion that can cause significant problems is the one that grows off the back side of the uterus and occupies to a greater or lesser degree, the cui de sac (area behind the uterus). This location is very important in the physiology of conception, therefore it is not uncommon to see patients with these kinds of lesions present with infertility.

Surgery to treat fibroids can also affect fertility in several ways. If the endometrial cavity is entered during the surgery, there is a possibility of post operative adhesion formation within the uterine cavity. This should always be checked for through the performance of a hysteroscopy or fluid ultrasound prior to beginning fertility treatment. Because myomectomy can be bloody, there is a high likelihood of abdominal adhesion formation, which could encase the ovaries, preventing the release of the eggs or block the ends of the fallopian tubes, or otherwise interfere with the normal functioning and relationships of the pelvic organs. For this reason it is important that only accomplished surgeons, who are familiar with techniques to limit blood loss and prevent adhesion foundation, perform myomectomies. In some cases multiple uterine fibroids may so deprive the endometrium of blood flow, that the delivery of estrogen to the uterine lining (endometrium) is curtailed to the point that it cannot thicken enough to support a pregnancy. This can result in early 1st trimester (prior to the 13th week of pregnancy) miscarriages. Large or multiple fibroids, by curtailing the ability of the uterus to stretch in order to accommodate the spatial needs of a rapidly growing pregnancy, may precipitate recurrent 2nd trimester (beyond the 131h week) miscarriages and/or trigger the onset of premature labor. As stated above, the location of the lesions is very important in the symptoms/impact. A lesion positioned just beneath the endometrial lining can make the structural integrity of the endometrium quite unstable and therefore, unable to develop in a progressive manner in preparation for implantation of the embryo.

These uterine fibroids are generally treated by means of three types of surgical procedures:

At the present time, effective medicines that can permanently shrink these fibroids are not available. Hence, surgical removal is the best option available for the treatment of intramural fibroids.

In this video, Dr. Vijayavel performed laparoscopy fibroid on a patient in Malaysia who had large intramural fibroid [10cm by 12cm] and how he safely removed all of them.

Note: The video tag is not supported in Internet Explorer 8 and earlier versions.